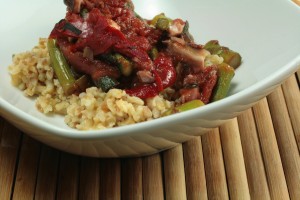 I’m getting cabin fever…and it ain’t pretty. I’ve been sick for almost four days and if I see one more Lifetime movie about some woman killing her husband for the insurance money/because he beat her/because it’s Tuesday, I’m going to throw something at my television.  And I can only read for so long (especially when all that lovely cold medicine takes effect and makes me want to sing show tunes) before my eyes start to cross.  So what else can I do to keep myself from starting fires (yeah, I think fire is pretty)?  I can cook…while sitting on a barstool to keep my balance.  Now you may ask “Why are you cooking when you can’t stand upright without some sort of support?”  And my answer:  do you want to hear about a raging fire in Shaw?  No?  Then shut up and keep reading… 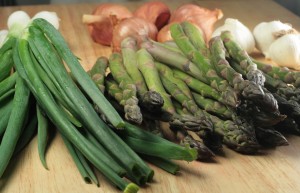 I had a pile of produce from my hippie box and I had no idea what to do with it.  In fact, it was just staring at me in a mocking way, daring me to cook it.  The only thoughts in my head were I  needed to add more whole grains to my diet.  This was mostly due to a very unsavory television show on Discovery Health about colon health.  I will spare you the details and only say that I was now more convinced than ever I needed to add as many legumes, grains, oats and barley to my diet as humanly possible.  So a vegetable stir fry of sorts was thrown together to be the topping for a box of Near East Whole Grain Blend.

4 roasted red peppers (since it’s not yet pepper season here, I used bottled)

28 ounce can whole peeled tomatoes, also coarsely chopped (reserve the juice from the can)

salt and pepper to taste

Near East Whole Grain Blend (any flavor) or couscous

Add one tablespoon of olive oil to a saute pan, placing it on medium heat.  Dice the shallots and the garlic, throwing them into the pan once it’s had time to heat up.  Saute them until the shallots start to become translucent.  Add the mushrooms and continue to stir for another three minutes.  Pour in the tomatoes and the juice from the tomatoes, along with the wine and stir to blend everything together.  Add the basil, red pepper flakes, ground black pepper and salt.  Reduce the heat slightly and allow the sauce to simmer.

While the sauce is simmering, start on the vegetables and make the whole grains according to the instructions.  In a separate pan, heat the remaining olive oil on medium high heat.  Add the asparagus and green onions, allowing them to cook until the asparagus turns a bright green.  Add the roasted red peppers and continue to cook for another 5 minutes.  I like my asparagus to have a bit of a crunch to them, even when I stir fry them.  If you prefer a slightly softer asparagus, allow the veggies to cook for an additional 4 to 6 minutes.

See, good things happen when you don’t listen to the voices in your head and try to start fires…