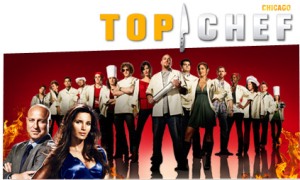 Okay, I have just finished watching this week’s episode of Top Chef and if you have TiVo’d it and don’t want to know the results, don’t read beyond the jump. But to say I am PISSED is an understatement…

Let me first start with Spike…Spike is that guy in high school who instead of doing his work relied on his “charm” to get away with everything. Even worse, he’s NOT THAT GOOD OF A CHEF! He claims he is a whiz at Vietnamese food but he couldn’t even do a simple spring roll! Just listening to his sleazy comments make me want to run and take a shower. Why the fuck is this guy still here?!?!?! Oh that’s right because he’d throw his mother under the bus if it meant he could get further along.

Now on to Lisa…Dear, bitchy, stick-up-her ass Lisa. She continually has this sour look on her face and oh wait, she also loves throwing people under the bus. She’s been up on the elimination block just as much, if not more than Spike, but yet she’s still here. She puts on these airs as if she has such a great palate and she’s this amazing chef but she’s fucked up time and time again.

So Dale (who everyone on the show didn’t like, but I personally loved) gets stuck with these two and surprise they fuck up and throw him under the bus. Yes Dale was the executive chef but the dishes the judges hated the most were LISA’S!!!! Spike’s got his thumb up his ass in the front of the house (apparently picking out napkins that reminded Bourdain of Prince’s boudoir van), which if I were a customer would have made me throw up. Dale may have been an egotist, but (and this is a big but) he had the skills to back it up. He won, or came close to winning, more quick fire and elimination challenges than anyone save Richard and Stephanie (although if I did the math, it probably would have been a tie). But because he was saddled with tweedle dee and tweedle dumb ass, he’s off the show! Fuck me, I’m pissed!

I wanted Dale to be in the final four with Richard, Stephanie and Antonia. Now, somehow Spike or Lisa – two of the most UNDESERVING chefs in all of Top Chef history – are going to slide their way into the final. They don’t deserve it…they’re nowhere near on par with Richard, Stephanie, Antonia or Dale’s level of expertise, skill or talent. Hell, I’m better than Spike and I have no formal training! My only hope is that Spike and Lisa go out in a huge flame of dis-glory and the world sees them for who they are: talentless hacks who have the morals of an alley cat.

Did I mention I was pissed?