I have found the Holy Grail of pizza doughs…and I am a better woman because of it. This dough can take on any toppings and still come out crisp and sturdy. It can withstand my falling asleep slightly while waiting for it to cook in the oven and still come out tasting fantastic. And since I still had three balls of dough left from the original recipe, I decided a homemade pizza would be a good way to pass the time sick in bed.

I had some tomato sauce left over from the asparagus, roasted red pepper and tomato saute I made and I was too sick to make a new sauce for the pizza. So I rolled out the dough, placed it on a baker’s peel sprinkled with corn meal (to prevent sticking) and topped it with the remaining sauce. I looked through my refrigerator and found some artichoke hearts and the remaining roasted red peppers, along with the goat cheese from the farmer’s market. I cut the peppers in long strips and tore apart the artichoke hearts, tossing them on top of the sauce. I crumbled the goat cheese over everything and used the olive oil from the artichokes to brush the exposed parts of the crust. I shimmied the pizza into the oven (preheated at your oven’s highest degree) and onto the baking stone…a momentous feat considering my medicated state. As always, if you have a baking stone, use that for a crispier crust. After about four minutes, turn the stone halfway to ensure even cooking. Cook for another five minutes or until the dough is golden.

When I originally made the dough, it took two days of preparation. But once the dough was made and the individual balls of dough were frozen, it was easy to throw together a pizza. In fact, not including defrosting time, it took only about 10 minutes to make…and tasted better than Ella’s Pizza (if I do say so myself). 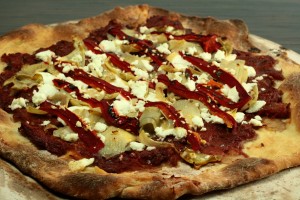