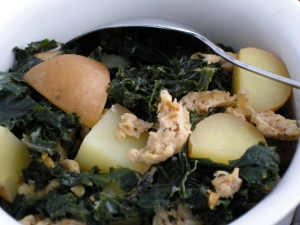 Why is the soup in quotes you ask? Because I don’t like soup…scratch that I don’t like non-creamy, really wet soup. And that eliminates quite a good portion of soups in the world. When I ran across a recipe for a smoked sausage, kale and potato soup, I thought “Nice flavor combinations, but why does it have to be ruined with broth”. So I put on my little thinking cap and came up with a way to incorporate the flavors of the recipe without all that pesky wet stuff. The result? A delicious concoction that made me glad I don’t like soup.

Feel free to follow the original recipe if you are a fan of soup, as I’m sure it’s just as tasty wet as it is the way I detail below. But not me…my fear of soup is deep seeded and haunts me to this day. When I was younger, my family lived in Baumholder, Germany on an Army base. For reasons I cannot recall, one lovely evening we went to a restaurant that I could swear was on a farm (I was only five at the time, so memories are still fuzzy). It was the first really nice restaurant memory I had…and it was ruined by a horrid french onion soup. To this day I remember that the soup tasted like the toe jam between a runner’s foot after he finished a marathon. 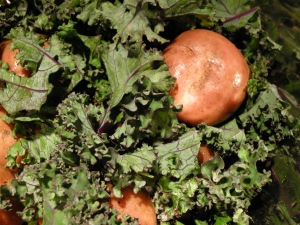 From that moment on, it was an uphill battle between my mother and me whenever she served soup. I’d sit at the table, pushing the fluid around in the bowl with my lip stuck out a mile long. She’d insist I stay at the table until it was finished but eventually relent when it got too late (I have always been stubborn). Since then, I’ve allowed exceptions for cream based soups and stews, but still shy away from most other soups. This, however, didn’t stop me from making this kale, potato and chicken sausage dish…by boiling the hell out of the broth until it was more of a thick reduction. Either way, it was delish and healthy…and all of the produce came straight from the farm! 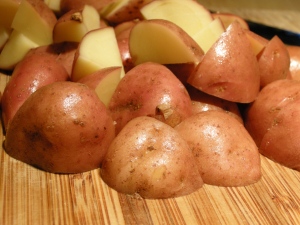 Heat the olive oil over medium high heat and add the chicken sausage. Saute until no longer pink and then add the broth and white wine. Bring to a boil and add the potatoes. Lower to a simmer, cover and allow to cook for about 10 minutes (unless you’re like me who let it cook for about 20 minutes in an attempt to reduce the sauce). Add the kale and allow to cook until the kale has wilted, about another 10 minutes (or about 15 if you’re trying to turn soup into something else).

The “broth” for me turned into a nice sauce that complimented the savory flavors of the chicken sausage (I distinctly tasted fennel), potatoes and ripe kale. I could definitely see how the broth would make a great soup base…but I’m not sitting at the table for soup. Yes, I’m still that stubborn.